"Do you have a place in your heart?" 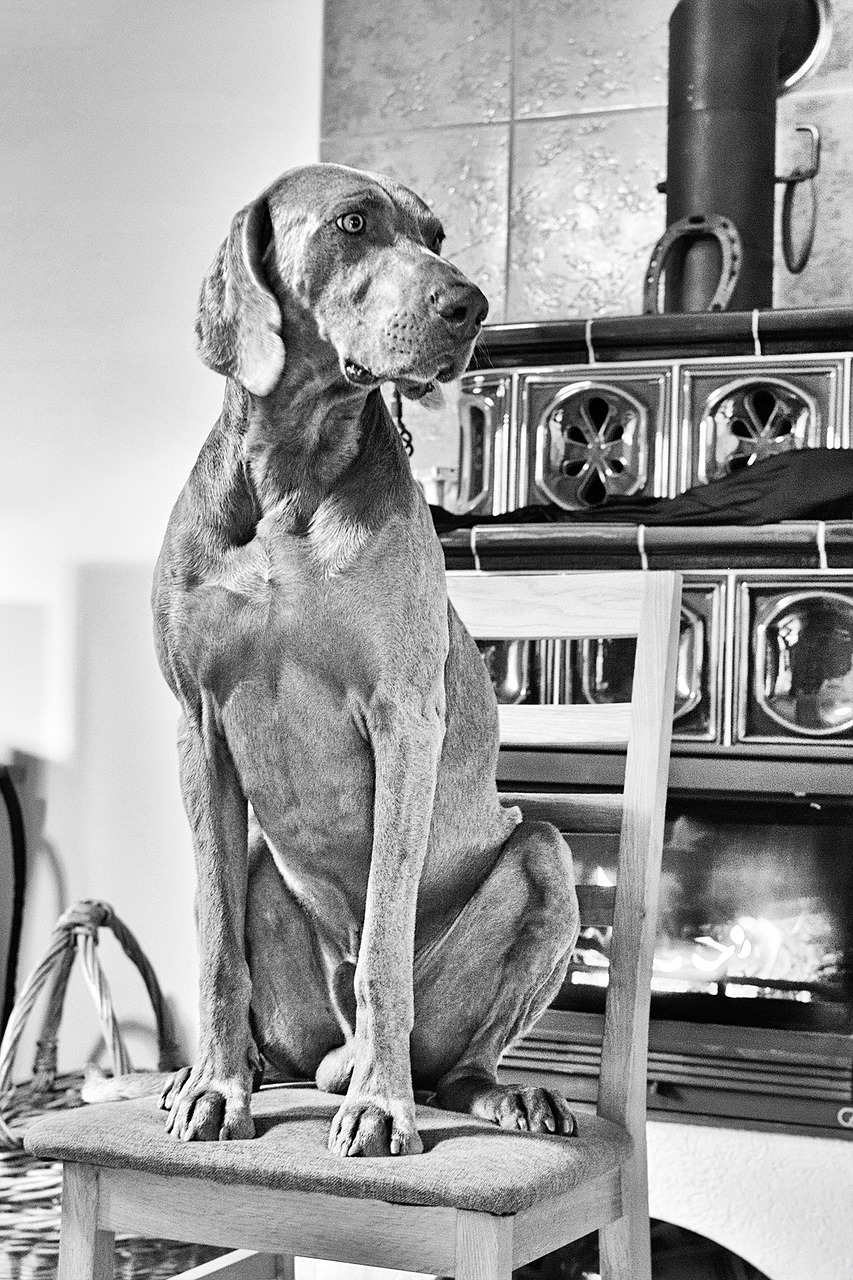 Taking a Weimaraner into Your Home

This information has been produced to inform you, as a possible prospective owner of a ‘Rescue Weimaraner’, just what you are letting yourself and your family in for and, hopefully, to encourage you to take on the very rewarding challenge of owning a Weimaraner.

So, what is this Grey Ghost?

No matter when we all arrived in the Weimaraner world, we were probably first attracted by the handsome streamlined looks and striking colour. This commanding appearance has been, to some extent, his downfall as the very attributes which make him so attractive often blind people to the fact that he is a very complex, very intelligent and active hunting dog.

The Weimaraner is a thinking breed. Being of a proud and dominant nature himself, he can quickly discover who in the family has a similar character and he, or quite often she, will receive the utmost respect and devotion. Likewise, he is intolerant of weaklings and will probably treat them with contempt.

Before going any further, let’s consider a little about the history of this magnificent breed. The Weimaraner is one of the Hunt, Point, Retrieve sub-group within the Gundog Group. An all-purpose breed whose temperament and character are quite different from that of other gundogs.

Weimaraners were used in Germany and in Austria for tracking wild boar and stag. Their owners required a dog with courage, a keen nose and sharp eye, who would point, retrieve, be obedient to recall under all conditions and ready to take to water when necessary. He was used as leader of the hunting pack , therefore an exceptionally close bond had to be established with the handler. He was, therefore, the only member of the dog pack which slept indoors. To this day, this relationship with humans is part of the make-up of the Weimaraner and he does not relish being a kennel dog. As a breed, the Weimaraner will respond readily to intelligent, kind handling. They are willing and sensitive with a great desire to please their owners. They make an excellent, clean house dog and adapt to the children of the family if brought up in their company from puppyhood. As part of our policy, we, in Rescue, prefer Weimaraners not to go into homes where there are young children unless we know that they have already lived happily with them. Of course, children also have a part to play in the relationship with the dog. Suffice it to say that no child should be left alone in a room with any dog, neither should a child be allowed to exercise a dog without adult supervision.

To describe the unique temperament and qualities of a Weimaraner to someone who has never known one is a difficult task. Because of their total devotion to their owners, gone are the days of even going to the toilet by yourself. They can be aloof, cool, almost snobbish towards strangers. Highly intelligent, at times tending to be more human than canine is an accurate description. Coupled with that intelligence is their ability to be demanding, strong-willed and possessive and this can be traced back to their original purpose of being ‘leader of the pack’. The trick is getting him to understand and accept that he is leader of the dog pack only, NEVER leader of the human pack. From his point of view, all members of the family are a pack. Deprive him of the companionship and authority of his pack by leaving him alone for many hours during the day and he will fret badly, showing his disapproval by being noisy, destructive or both.

Although the breed possesses a strong guarding instinct, Weimaraners are not a ‘Guard Dog’ as such, but more a companion dog which will guard you. He does not need a large garden, only a well-fenced one, i.e. 6ft high. He requires not only free-running and disciplined exercise, but, because of his uncanny thinking ability, exercising his brain can test his own powers of reason and your own initiative. With careful, patient training, he must learn the rules of the household, not the ones he has made up for himself. He is a strange mixture of willfulness and sensitivity. Too harsh an approach and he will ‘blank out’, seemingly unable to understand the simplest requirement. Too much leeway and he will do his own thing in a way that you will not find amusing. Under-exercised, unoccupied and bored, he will become boisterous and can wreak havoc. He is quite capable of re-arranging your landscape, introducing a tasteful tunnel with very little apparent effort. Given the commitment of your time, attention and an understanding and respect for his heritage, he will be an extremely devoted friend and companion.

What does he need from you?

Any adult dog re-housed needs time to adjust and settle in. Please remember he will already have habits of his own. He does not arrive on your doorstep knowing exactly what you expect of him. In other words, he is not made to order. He will undoubtedly miss his previous home, no matter how good or bad it was. Therefore it is quite normal for the dog to have a few difficulties in the early days. Sometimes, he will even be on his very best behaviour while he ‘susses you out’, but that will not last. Any problems you do encounter such as not eating, whining or even loss of previous toilet training will resolve themselves if you are understanding about his feelings. You will, of course, be told of any specific problem so that we can help you deal with it in the correct way.

If you have a dog already, it is best for them first to meet and go for a short walk on leads on neutral territory, that is away from your home and garden. That way, your existing dog will more readily accept the incomer. Please, no matter how excited you and the children are to finally get your Weimaraner, try to keep the situation as calm as possible. The Weimaraner will have found the move very stressful so it is best not to allow him to become over-excited.

Until you get to know your new Weimaraner’s own little peculiarities and, equally, until he gets to know yours and the standards of behaviour you will expect, avoid confrontational situations. If he hides under the dining room table or ducks behind the sofa, don’t go in after him. It is much easier to coax him out preferably with a tasty morsel. He is probably only seeking a place where he can feel more secure. Using distraction and persuasion will achieve much more than manhandling and constant yelling and your Weimaraner will respect your position as pack leader rather than challenge it.

Have a name tag with your telephone number attached to your dog’s collar at the first opportunity. Your dog should not be off the lead in a public place until you are 100% sure that he will return to you when called. He might spot someone who reminds him of his previous owner and may try to run after them. The Dangerous Dogs Act, and the publicity given to the tragic events that led up to it, has meant that many people are very frightened of large dogs. It is, therefore, crucial that you do not allow your Weimaraner to be a nuisance.

It is a good idea to enrol yourselves at a local dog training class. This will help build a relationship between you. Your Vet will usually know of a reputable class where training is done with kindness and fairness. Remember YOU are the one being taught how to teach your dog. Kindness and consistency are the keys. You will only confuse him if you keep chopping and changing.

Socialise him in as many and varied situations as possible. Firm handling does not mean harsh handling. ‘THINK DOG’ and learning to read your dog will be the first step to a long and happy relationship.

If you intend to change his diet, do so very gradually to avoid an upset stomach. Weimaraners should NEVER be fed less than twice a day and it is important that he should not have strenuous exercise immediately before or after a meal. How would your stomach feel if you ran a marathon before or after Sunday lunch?? Ears should be checked regularly. There are several excellent products available for cleaning. Wipe any dirt or wax with some lint wrapped round your finger. Never use cotton buds as this could be dangerous. Teeth should be inspected and cleaned regularly mainly to prevent gum disease. The dog toothpastes on the market now are excellent and Weimaraners seem to love the taste. Claws also need attention and are relatively easy because of their light colour. However, dogs not used to having their claws cut on a regular basis might be better taken to the Vet for this. Grooming again is simple with a rubber glove. Weimaraners do cast. Grooming not only removes dead fur but stimulates the skin to keep it healthy. It will also give you the chance to check for any damage, ticks or lumps. Your Weimaraner will enjoy the massage anyway. You must also ensure that he is wormed twice a year and you should obtain a supply of worming tablets from your Vet.

Everything about the Weimaraner has an element of challenge. He is such a ‘get up and go’ creature possessed of a quick intelligence, an abundance of energy, a drive to hunt, a streak of possessiveness and an exaggerated devotion which has to be tempered to the demands of modern living. He is not everyone’s dog, nor is he a commercial proposition, but the rewards of taking on such a challenge are immense not least the knowledge that you have given a loving home to a Weimaraner in need.

We hope we have whetted your appetite enough to encourage you to take another step towards offering your home to one of our unfortunates.